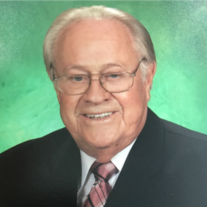 Rev. Sidney McLeod, 92, went to his heavenly home on Sunday morning, June 24, 2018 at his home in Amory. He was born on July 13, 1925 to Jasper and Nancy McLeod near Cave City, Arkansas. He was saved when he was 15 and called to preach when he was 22. He attended Missionary Baptist Seminaries in Little Rock, Arkansas, and Minden, Louisana, receiving Bachelor and Master degrees in English Bible. He served as trustee for the Texarkana Baptist Children’s Home in Texarkana, Arkansas, for 15 years and as Moderator of the State Assembly in Arkansas, Oklahoma, and Alabama. He preached in India and Israel and also preached revivals in 18 states. He had radio programs in Arkansas and Mississippi while pastoring. He pastored churches for 67 years in Arkansas, Oklahoma, Louisiana, Florida, Mississippi, and Alabama, and after full-time pastoring, did fill-in preaching until age 87. He was happiest when he was preaching the word of God. Funeral services will be at 2 p.m. on Wednesday, June 27, 2018 at the Hatley Missionary Baptist Church with Dr. Gary Self and Dr. Allen Simpson officiating. Services in Alexander, Arkansas will be 11 a.m. on Friday, June 29, 2018 at Pinecrest Funeral Home with Rev. James Calhoun officiating. Interement will follow in Pinecrest Memorial Park. Cleveland-Moffett Funeral Home is in charge of the local arrangements. Survivors include his wife of 22 years, Betty Barnes McLeod; two daughters, Sue Fairchild and Recia Edmonson of Arkansas; three stepdaughters, Judy Tyree (Mike), Anita Vaughan (Dwight) both of Hatley, and Cindy Harmon (Randy) of Becker; one sister Elsie Israel of Texas; 17 grandchildren; 39 great grandchildren; 2 great grandchildren; and a host of nieces, nephews, and friends. He was preceded in death by his parents; his first wife of 52 years, Leota Palmer McLeod; two sons, Johnnie and Paul McLeod; 2 great grandchildren; seven brothers; and five sisters. Pallbearers will be Dwight Vaughan, Mike Tyree, Randy Harmon, John Hall, Tim Holman, Justin Vaughan, Trent Harmon, Jackie Duke. Honorary pallbearers will be the deacons of Hatley Missionary Baptist Church. Visitation will be from 5 until 8 p.m. on Tuesday evening at the church. In lieu of flowers, the family requests that memorials be made to the Louisiana Missionary Baptist Seminary, 102 Seminary Lane, Minden, LA 71055
To order memorial trees or send flowers to the family in memory of Sidney McLeod, please visit our flower store.