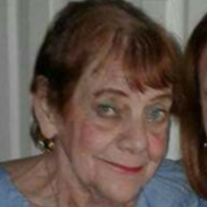 Sandra Barbara Felsing Whitlock, 74, died on Monday, July 31, 2017 at her daughter’s home in Smithville. Born February 3, 1943 in Milwaukee, Wisconsin, she was a daughter of Edward and Josephine Solberg Felsing. Prior to her retirement, Sandra worked for Sav-A-Lot in Amory and she had attended First Free Will Baptist Church in Amory. Her hobbies included working crossword puzzles, watching The Young and the Restless on TV, playing electronic games, working with flowers and playing bingo. She was a great cook and enjoyed spending time and playing board games with her family and she cherished the time spent with her grandchildren. Memorial services for Sandra will be at 2 p.m. on Friday, August 4, 2017 at the Cleveland-Moffett Funeral Home with Bro. John Hallman officiating. Survivors include her daughter, Dawn Whitlock Thompson (Chad) of Smithville; two sons, James Allen “Dino” Zitella (Patricia) of Amory and Ronnie Hamilton of Nevada; 2 grandchildren, Jacob Ryan Garrison (Maggie) and Sandra Brooklyn Presley; one great grandchild, Kayden Blake Garrison; several step grandchildren and great grandchildren that she loved as her own; 2 special nieces, Mary Springer and Donna Marie Walters; a host of other nieces and nephews; and daughter-in-love, Holly Holman Moffett. She was preceded in death by her parents; one sister, Shirley Ann Felsing; her brother, Edward Felsing, Jr,; her husband, James David Whitlock; and special friend and companion, Jim Ballard. Visitation will be held from 5 until 8 p.m. on Thursday evening at the funeral home. Special thanks are given to the caregivers at Legacy Hospice.
To order memorial trees or send flowers to the family in memory of Sandra Whitlock, please visit our flower store.