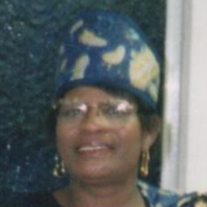 Quintella Griffin, 71, was called home by her heavenly father on Monday, June 13, 2016 having been on the battlefield four months. She was born to the union of the late Rena Mae Vasser Everett and the late Eugene Cofield, Jr. on March 3, 1945 and she was raised by her maternal grandparents, the late Benny and Mattie Vasser. Accepting the Lord as her savior at an early age, she united with St. James United Methodist Church in Amory where she remained until the Lord called her home. Uniting in holy matrimony with Elic Griffin, she bore two children Lernard Griffin and Dr. Partizia Griffin Grigsby. She served as a Sunday school teacher, Director of the Vacation Bible School and she served as President of the United Methodist Women during her time of service at St. James United Methodist Church. Her hobbies included cooking, sewing, writing inspirational poems, and mentoring young adults interested in learning more about the various ministries of the United Methodist Church. Her motto in life was “If I can reach out and touch one soul, then my living was not in vain.” Funeral services will be at 2 p.m. on Monday, June 20, 2016 at the St. James United Methodist Church. Burial will follow in the United Memorial Cemetery. She will lie in repose one hour prior to services at the church. She leaves to cherish her memories her son, Lernard Griffin of Amory; her daughter, Dr. Patrizia Grigsby (Keithon) of Suffolk, VA; 5 grandchildren, Mar’sha Griffin of Crestview, FL, Amber Bolden of Hattiesburg, Jaquile Nabors of Tupelo, Jewlyus Grigsby of Suffolk, VA, and Adrian Rucker of Aberdeen; great grandson, Kingston Bolden; 7 sisters, Teresa Cofield, Mary McKinney, Mattie Gilleylen, Hattie Talley, Gracie Klyce, Barbara Bell (Curtis), and Alice Smythe; 5 brothers, Jerry Cofield, Leonard Vasser (Etonia), John McClarity, Bobby McClarity, and Thomas McClarity; 3 aunts, Merle Cofield, Levern Cofield (Grady), Freda Cofield (Sid); and two uncles, Dewey Cofield (Cameron) and Dexter Cofield (Lunette). She was preceded in death by Beulah Vasser, Mattie Vasser, Benny Vasser, Rena Mae Everett, Eugene Cofield, Jr.; sisters, Ella Lou Braylock and Helen Wilkerson; three brothers, D.L. Vasser, Benny Vasser, and Willie McCance. The viewing for the family hour will be from 4 until 6 p.m. on Sunday, June 19, 2016 at the Cleveland-Moffett Funeral Home in Amory and the family will receive friends from 6 p.m. until 8 p.m. Memories and condolences may be expressed at clevelandmoffettfuneralhome.com
To order memorial trees or send flowers to the family in memory of Quintella Griffin, please visit our flower store.