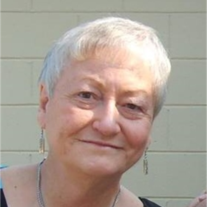 Peggy Sue Harper Conwill, 69, died on Thursday, December 15, 2016 at her daughter’s residence in Petal, MS. Born on May 25, 1947 in Amory, she was a daughter of Robert and Pansy Ford Harper. A 1964 graduate of Amory High School, she was a standout athlete achieving female Panther athlete of the year and received All Little Ten awards in basketball. She was President of the A Club and chosen as friendliest. Following graduation, she attended IJC and Mississippi State University receiving her B.S. in Education in 1967. She taught in the Amory School District and Monroe County Schools for 20 years retiring from the Becker School where she passionately coached basketball, softball, and was the cheerleader sponsor. After her retirement from teaching, Peggy worked for Aircap MTD in Verona for 15 years where she was the paint shop supervisor. In 2013, she moved to Petal to live with her daughter following a stroke. While in Petal, she became a member of the North Forrest High School family attending many football, basketball, and baseball games with her daughter and developed a great bond with those players and coaches. Known for her beaming sense of humor, she never met a stranger and she made everyone feel loved. She cherished the time spent with her family and this past June, a Becker School class reunion was held in honor of Peggy and it became one of the greatest memories of her life. Funeral services for Ms. Conwill, will be at 2 p.m. on Sunday, December 18, 2016 at the Cleveland-Moffett Funeral Home in Amory with Bro. Rob Westbrook, Ms. Lindsey Gallant, and Ms. Tracy Bryant officiating. Burial will be in the Haughton Memorial Park. Survivors include her son, Chris Conwill (Kristy) of Vernon, AL; her daughters, Casey Conwill and A.J. Holmes of Petal; 4 grandsons, Skyler Conwill, Braxton Conwill, McKellar Conwill, and Calen Conwill; one sister, Patty Harper (Sammy Gilliam) of Talladega, AL; one brother, Bobby Harper (Carol) of Smithville; special friends, Coach Darryl McCoy, co-workers and former students at Becker School, co-workers at Aircap MTD, North Forrest High School coaches and athletes, Hattiesburg Clinic Dialysis Unit and Staff, Jamie Williamson, RN, Lisa Dykes, RN, caregivers, Brittany Breland and Katilyn Jones; and numerous aunts, uncles, nieces, nephews, and cousins. She was preceded in death by her parents and grandparents, Johnnie and Modean Harper and Dew and Ora Ford. Pallbearers will be Anthony Dillon, John Brown, Allen Fails, Gary Jenkins, Johnny Finch, Kenneth Ray, Doug West, and Matthew Edgil. Honorary pallbearers will be North Forrest High School football and basketball teams, Timmy Camp, Craig Howell, and Steve Hunt. Visitation will be from 5 until 8 p.m. on Saturday evening at the funeral home. Memorials may be given to the American Cancer Society, c/o Beth May, P.O. Box 269, Amory, MS 38821 or to the American Kidney Fund, www.kidneyfund.org Memories and condolences may be expressed at clevelandmoffettfuneralhome.com
To order memorial trees or send flowers to the family in memory of Peggy Conwill, please visit our flower store.