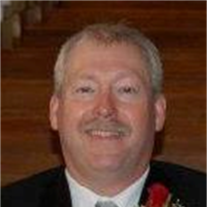 Mike Watson, 53, of Becker died Monday, July 3, 2017 in Monroe County. He was born December 4, 1963 in Aberdeen to Finley and Ann Duke Watson. Mike was a graduate of Aberdeen High School and he received a forestry degree from Itawamba Community College. For the past 29 years, Mike has worked for AKZO Nobel in Columbus as HPC Process Foreman and he married Kay Moffatt on April 27, 2007. He enjoyed spending time with his family and took great delight in helping others. An avid outdoorsman, Mike enjoyed fishing and participating in local “fruit jar” tournaments, playing golf, and being gifted with his hands, he was exceptionally skilled at woodworking. A sports enthusiast, he was a diehard Ole Miss fan. He was a member of the First Baptist Church in Aberdeen. Funeral services will be at 11 a.m. on Thursday, July 6, 2017 at the Cleveland-Moffett Funeral Home Chapel with Bro. Roy McHenry and Bro. Ray Carroll officiating. Burial will be in the Haughton Memorial Park. Survivors include his wife, Kay Watson of Becker; his mother, Ann Watson of Aberdeen; one son, Dustin Watson (Whitney) of Hamilton; two daughters, Nickie Watson Nichols (Brian) of Stevenson, AL and Kayla Watson of Hamilton; one brother, Tony Watson (Tammy) of Amory; and one sister, Penny Fair (Jeff) of Aberdeen; his mother-in-law, Faye Moffatt of Becker; 4 grandchildren, Madison Justice, Ryleigh Watson, Cooper Watson, and Ainsley Nichols; and nieces and nephews, John Stanford (Casey), Beverly Wright (T. J.), Hope Johnston (Alex), Ben Watson, Megan Fair, Jake Watson, Dru Stanford, Kayli Stanford, Deanna, Noah, and Emily Wright, and Braelynn Johnston. He was preceded in death by his father, Finley Watson and a nephew, Matt Watson. Pallbearers will be Richard Coleman, Alex Johnston, T.J. Wright, Richie Wright, Jeff Adams, and Mark Caldwell. Honorary pallbearers will be fellow employees of AKZO Nobel and those who served our nation. Visitation will be 5 until 8 p.m. on Wednesday at the funeral home. Memorials may be made to the River Bend Baptist Church, 50361 Old Hwy 25 South, Aberdeen, MS 39730. Condolences may be expressed at clevelandmoffettfuneralhome.com
To order memorial trees or send flowers to the family in memory of Mike Watson, please visit our flower store.