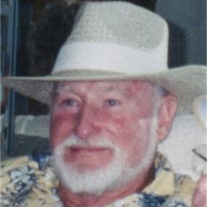 Leo Holloway, 82, died on Tuesday, October 04, 2016 at his residence. Born July 20, 1934 in Itawamba County, he was a son of Roy and Lula Harris Holloway. He was married to Betty Millican on April 25, 1953 and then later married Glenda Knight on May 16, 1996. Prior to his retirement he traveled the United States as the owner/operator of Holloway Tower and Antenna. He was of the Baptist faith and his hobbies included motorcycles and riding 4-wheelers. Funeral Services will be 2 p.m. on Saturday, October 8, 2016 at the Cleveland-Moffett Funeral Home with Bro. Jamie Gillentine officiating. Burial will be in the Liberty Grove Cemetery. Survivors include his wife, Glenda Knight Holloway; two daughters, Debra Fooshee (Chris) of Mooreville and Sherry Davis (Billy Clark) of Mooreville; an adopted son, Andy Holloway (Casey) of Amory; stepson, Jeff Lindsey (Lisa) of Tremont; three stepdaughters, Pam Miller of Marietta, GA, Debbie Goodman of Woodstock, GA, and Sonja Goodman of North Carolina; three brothers, Len Holloway (Sue) of Smithville, Wilburn Holloway (Billy) of Pontotoc, and Joe Holloway (Rita) of Tupelo, one sister, Judy Gillentine (Kenneth) of Nettleton; three grandchildren, two great grandchildren, five step grandchildren, 4 step great grandchildren, and soon to be great-great grandchild. He was preceded in death by his parents; his first wife; one brother, John D. “Bunk” Holloway; and three sisters, Jane Tindell, Nellie Fay Patterson, and Gertrude Lindsey. Visitation will be 5 until 8 p.m. on Friday evening at the funeral home. Memories and condolences may be expressed at clevelandmoffettfuneralhome.com
To order memorial trees or send flowers to the family in memory of Leo Holloway, please visit our flower store.