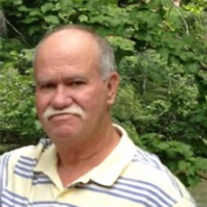 Larry Edward Frye, 66, received his miracle and entered into the presence of his Savior on Thursday, August 9, 2018 following a two year battle with leukemia. A beloved husband, father, grandfather, brother, and a son of God, he was born on August 22, 1951, to the late Gillie and Jocie Frye. On December 20, 1968, Larry married his sweetheart, Lynda Dodd. He was a family man devoted to his wife and only daughter. A hard worker, he was employed at Vista Chemical for 30 years. A Godly man, Larry was known to share the good news of his faith with others and served as a deacon at Amory First Free Will Baptist Church. One of his favorite verses was, “If in this life only we have hope in Christ, we are of all men most miserable.” I Corinthians 15:19. Larry and Lynda enjoyed traveling together out west to the mountains and cruising with their kids on Disney Cruise Line. His grandsons brought much joy into his life travelling to most of Drew’s ice hockey games and he liked reading the stories Drew wrote. He enjoyed attending Parker’s fishing tournament weigh-ins and listening to Parker play the guitar. Larry also enjoyed hunting, fishing, and watching Auburn football. Those left to cherish his memory are his wife of 49 years, Lynda Frye; daughter, Theresa Maples (Randy); grandsons, Drew Maples (Lexi) and Parker Maples; sister, Syble Corbett; and a host of nieces and nephews. He was preceded in death by his parents; and his sisters, Jerry Kollar, Marie Jackson, and Annette Gilmore. A celebration of Larry’s life will be at 2 p.m. on Sunday, August 12, 2018 at Cleveland-Moffett Funeral Home in Amory with Bro. Jerry Atwell, and Bro. Chris Mitchell officiating. A graveside committal service will be at 4:30 p.m. at the Oak Grove Cemetery near Haleyville, AL with Bro. Randy Maples officiating. Pallbearers will be Drew Maples, Parker Maples, Chris Markham, Ricky Sprinkle, John Phillips, and Barney Vann. Honorary pallbearers will be J.W. Vann and the Amory First Free Will Baptist Church adult Sunday school class. Visitation will be from 5 until 8 p.m. on Saturday evening at the funeral home. Condolences may be shared with the family at clevelandmoffettfuneralhome.com
To order memorial trees or send flowers to the family in memory of Larry Edward Frye, please visit our flower store.