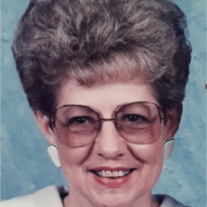 Trannie Joyce Riley Cummings, 81, died on Friday, September 29, 2017 at the North Mississippi Medical Center Hospice in Tupelo. Born June 6, 1936 in Nettleton, she was a daughter of Frederick Dillon and Oca Bell Elliot Riley. Joyce grew up in the Carolina Community, attended Carolina School, and later married Ernie Cummings in 1974. Together, they owned and operated Cummings Grocery in Evergreen for many years. A faithful member of Carolina Missionary Baptist Church, she, alongside her husband, could always be found serving the church or doing for others. She enjoyed sewing, gardening, and visiting friends and family. Known for her love of shopping, she would stay at Dirt Cheap for hours. Funeral services for Mrs. Cummings will be at 11 a.m. on Monday, October 2, 2017 at the Cleveland-Moffett Funeral Home in Amory with Bro. Joey Goodwin and Bro. Ricky Jones officiating. Burial will be in the New Chapel Cemetery. Survivors include two daughters, Vicki Smith of the Carolina and Teresa Winters (Mike) of the Unity Community; one brother, Johnny Riley (Elaine) of Carolina; one sister, Louise Shelton (Byron) of Carolina; 4 grandchildren, Scott Smith, Bryson Winters (Christine), Jeb Smith, and Justin Winters (Ashley); a host of nieces and nephews; and countless faithful friends. She was preceded in death by her parents; her husband; a sister, Doris Hendrix (Eldridge); and son-in-law, Joel Smith. Pallbearers will be Scott Smith, Bryson Winters, Jeb Smith, Justin Winters, Danny Shelton, and Ricky Hendrix. Visitation will be from 5 until 8 p.m. on Sunday evening at the funeral home. Condolences may be expressed at clevelandmoffettfuneralhome.com
To order memorial trees or send flowers to the family in memory of Joyce Cummings, please visit our flower store.