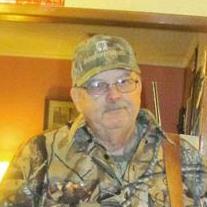 Dr. Jimmy Aaron Wigginton, 69, died on Tuesday, February 3, 2015 at the North Mississippi Medical Center in Tupelo. Born January 6, 1946 in Tishomingo County, he was a son of Bill and Myrtle Rogers Wigginton. He was a graduate of Smithville High School at the age of 16. He was married to Phyllis Dykstra. He attended IJC and Mississippi State University where he received his Master’s degree. Jimmy taught at Hatley School and the Monroe County Vo-Tech. In 1998 he received is Doctor of Education degree from Mississippi State University and became the director of the Monroe County Vo-Tech in 2001. After his retirement, he worked as a locksmith with his father. Jimmy loved deer hunting, reading, traveling, carpentry, the 3 o’clock coffee crew at Hardee’s and he especially enjoyed his children and grandchildren. He was saved at Trace Road Baptist Church. Funeral services will be 11 a.m. on Friday, February 6, 2015 at the Cleveland-Moffett Funeral Home chapel in Amory with Bro. Van Dale Hudson officiating. Burial will follow in the Young Memorial Gardens. Survivors include his wife of 49 years, Phyllis Wigginton of Smithville; one son, Jason Wigginton of Smithville; one daughter, Angela Wigginton of Smithville; 3 brothers, Roger Wigginton (Carolyn), Danny Wigginton (Linda) of Fulton, and Randall Wigginton (Beverly) of Smithville; one sister, Kathy McCool (Jimmy) of Smithville; 3 grandchildren, Jasmine, Chase, and Makenzie Wigginton; and a brother and sister-in-law, Larry and Ann Beasley of Tupelo. He was preceded in death by his parents; one son, Kevin Wigginton; one brother, Prentiss Wigginton; and 2 nephews, Adam Wigginton and Allen Wigginton. Pallbearers will be Danny Grimes, Johnny Ellington, Van Burroughs, Billy Wayne Harlow, Bryon Wigginton, Scott Wigginton, Larry Beasley, Brad Wigginton, David Wigginton, and Kevin Hathcock. Honorary pallbearers will be Donald Ray Vandiver, Earnest Oswalt, and the Hardee’s 3 o’clock coffee crew. Visitation will be 5 until 8 p.m. on Thursday evening and will continue until service time on Friday at the funeral home. Memories and condolences may be expressed with the family at www.clevelandmoffettfuneralhome.com
To order memorial trees or send flowers to the family in memory of Jimmy Wigginton, please visit our flower store.