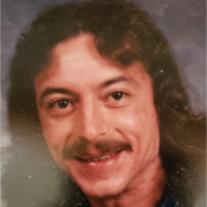 Jimmy Harold “Pebo” Hurley, Jr., 56, passed away on Wednesday, December 18, 2019 at his home in the Quincy Community. Born on April 21, 1963, he was the son of Jimmy H., Sr. and Linda Seymore Hurley. He attended Becker school and before becoming disabled, he worked in the area furniture plants and was a carpet layer. He enjoyed Karate, fishing, and watching westerns on television. Pebo was an avid collector of knives. Services will be at 11 a.m. on Saturday, December 21, 2019 at Cleveland-Moffett Funeral Home with Bro. Jacky McNeese officiating. Burial will follow in the Hurley Family Cemetery. Survivors include his parents, Jimmy, Sr. and Linda Hurley; one sister, Lori Reeves (Ricky) of Bartahatchie; niece, Destiny Head; nephews, Josh Head, John Head, Hunter Reeves, Greg Wright, and Timmy Nantz, Jr.; brother-in-law, Bobby Head; and special friends, David Vail, Stewart Ponts, Randy Kimbrough, and Robert Hacker. He was preceded in death by his sister, Amanda Head; and his grandparents. Pallbearers will be Randy Weaver, Harold Guyton, Josh Head, John Head, Tony Head, and Ronnie Hurley. Honorary pallbearers will be David Vail, Stewart Ponds, Randy Kimbrough, and Robert Hacker. Visitation will be on Friday evening from 5 until 8 p.m. at the funeral home. Condolences may be shared with the family a www.clevelandmoffettfuneralhome.com
To order memorial trees or send flowers to the family in memory of Jimmy Hurley, please visit our flower store.