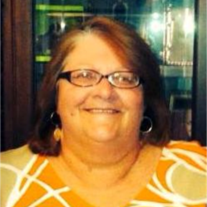 Holly Virginia Hood Cooley, 56, died on Thursday, July 7, 2016 at the North Mississippi Medical Center in Tupelo. Born October 12, 1959 in Amory, she was a daughter of Homer Hansel “Hank” and Virginia Rye Hood. A 1977 graduate of Smithville High School, she also attended Itawamba Junior College and she married Allen Cooley. She was a fan of Mississippi State University, a fan of anything pertaining to the Smithville Seminoles and she was an encouragement to all Smithville athletes. With a love for her community, she was one of the greatest advocates for the Town of Smithville. She was known for her contagious laugh, and her carport gatherings, filled with many opinions, were known as “The View.” With a deep, abiding faith she was a member of the Smithville Baptist Church. Funeral services will be 2:30 p.m. on Sunday, July 10, 2016 at the Smithville Baptist Church with Bro. Wes White officiating. Burial will follow in the Young Memorial Gardens. Cleveland-Moffett Funeral Home of Amory is in charge of the arrangements. Survivors include her husband, Allen Cooley of Smithville; her parents, Hank and Virginia Hood of Smithville; 2 daughters, Mallory Cooley and Martha Grace Cooley both of Smithville; one brother, Randy Hood (Jennifer) of Smithville; two sisters, Melissa Dupree (Garry) and Leigh Skinner (Johnny) all of Smithville. Pallbearers will be Tyler Hood, Tucker Hood, Cal Dupree, Camdon Skinner, Brody Skinner, Hank Skinner, Max Skinner, Ed Hebert, Andrew Taylor, Eli Taylor, and Michael Kennedy. Honorary pallbearers will be the Monroe County Sheriff’s Department. Visitation will be from 5 until 8 p.m. on Saturday evening at the Smithville Baptist Church. Memorials can be made to Smithville High School Athletics, 60017 Hwy 23, Smithville, MS 38870. Condolences may be shared at clevelandmoffettfuneralhome.com
To order memorial trees or send flowers to the family in memory of Holly Cooley, please visit our flower store.