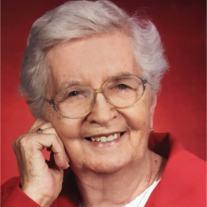 Hildra Lorene Thompson Cooper, 91, passed away on Monday, September 4, 2017 at the Gilmore Memorial Hospital in Amory. Born October 15, 1925 near Smithville, she was a daughter of Moman and Emmer Lou Thompson. She was a graduate of Smithville High School and she married J.W. Cooper. Prior to her retirement, Mrs. Cooper worked for over 20 years at Glenn Manufacturing in Hatley and later at the day care center in Amory. She kept children in her home for several years, was an Avon representative, and she worked for three years at the grocery store in the Parham Community. Mrs. Cooper was a member of the New Hope Church of Christ in the Parham Community for many years, and after moving to Amory in 2007, she attended the Amory Church of Christ. She enjoyed spending time with her family, cooking, visiting in person or by phone with her friends, and reading. A devoted Christian, she especially enjoyed going to church and listening to Bible tapes. She was very independent and learned to drive a car after she was in her 40’s. She will be deeply missed. Funeral services for Mrs. Cooper will be at 2 p.m. on Wednesday, September 6, 2017 at the Amory Church of Christ with Minister Philip Hathcock and Mr. Brad Blalock officiating. Burial will be in the New Hope Cemetery. Cleveland-Moffett Funeral Home of Amory is in charge of the arrangements. Survivors include two sons, Jerry Cooper and his wife Janette of Amory and Harold Cooper and his wife, Sherryel of Amory; one daughter, Nell Cooper and her husband, Ron Classen of St. Augustine, FL; one sister, Hazel Jones (Don) of Jacksonville, FL; one sister-in-law, Audrey Thompson Vann (Barney) of Smithville; 7 grandchildren, Rick Bartlett, Diane Bartlett Wells, Jason Cooper, Shay Cooper, Scott Cooper, Chad Cooper, and Candace Cooper Blalock; 12 great grandchildren; and one great-great granddaughter. She was preceded in death by her parents; her husband; one son, James Cooper; a great granddaughter, Adilynn Claire Cooper; and two brothers, Trennon Thompson and Kenneth Thompson. Her caregivers included her daughter-in-law, Janette Cooper and Shirley Camp. Appreciation is extended to Dr. Dwight McComb and the staff, nurses, and doctors at River Place and Gilmore Memorial Hospital. Pallbearers will be Scott Cooper, Shay Cooper, Chad Cooper, Justin Cooper, Brad Blalock, Barney Vann, Monty McCormick, and Larry Spann. Visitation will be 5 until 8 p.m. on Tuesday at the Amory Church of Christ. Memorials may be made to the Amory Church of Christ, P.O. Box 371, Amory, MS 38821 or to the New Hope Cemetery, c/o Linda Worthey, 60023 Worthey Lane, Amory, MS 38821. Condolences may be shared at clevelandmoffettfuneralhome.com
To order memorial trees or send flowers to the family in memory of Hildra Cooper, please visit our flower store.