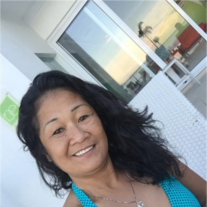 Amory- Gina Aclan Cadden, 52, passed away on Thursday, January 9, 2020 at North Mississippi Medical Center in Tupelo. Born on June 7, 1967 in Manila, Philippines, she was a daughter to Pio and Teresita Delumen Aclan. Gina came to America as a serviceman’s wife and later met and married Tommy Cadden on July 18, 1996 while he was stationed in the Navy in Jacksonville, FL. She was a huge supporter of the United States military and she has been an Amory resident since 1996. An avid golfer, she was a member of River Birch Golf Club where she also worked in the pro shop for many years. She loved to play different courses winning many tournaments. A loving mother and supporter, she was also totally devoted to her grandchildren who called her, Lola. She was Catholic. Funeral services will be at 11 a.m. on Monday, January 13, 2020 at Cleveland-Moffett Funeral Home in Amory. Visitation will be on Saturday, January 11, 2020 from 5 until 8 p.m. also at the funeral home. Survivors include her husband, Tommy Cadden of Amory; her father Pio Aclan; one son, Bryan Smith (Michelle) of Ft. Walton, FL; three daughters, Janet Cadden (Alexis) of Gainesville, FL, Kathie Ochoa (Jimmy) of Gainesville, and Jessica Bowling (Raymond) of Fulton; brother, Jon Jon Aclan of the Philippines; three sisters, Gilda Aclan of the Philippines, Grace Obensa (Omar) of Salt Lake City, UT, and Glenda Bowser (Kevin) of Canada; her grandchildren, Alejandro, Kaleb, Julian, and Isaac; her father-in-law, Johnny Cadden (Nell); several nieces, nephews, and friends on and off the golf course. She was preceded in death by her mother; her mother-in-law, Barbara Justice; and her father-in-law, Richard Justice. Pallbearers will be Raymond Bowling, Bryan Smith, Chase Tubbs, Zac Hawkins, Luke Renfro, and Hunter Ashcraft. Honorary pallbearers will be Kaleb Bowling, Alejandro Ochoa, Julian Ochoa, and Isaac Bowling. In lieu of flowers, memorials may be made to St. Jude Children's Research Hospital. Memories and condolences may be shared with the family at clevelandmoffettfuneralhome.com
To order memorial trees or send flowers to the family in memory of Gina Cadden, please visit our flower store.