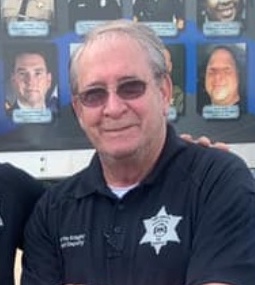 Ronald Curtis Knight, 68, passed away on Monday, February 21, 2022 at North Mississippi Medical Center in Tupelo.  He was born on December 9, 1953 in Amory to Hubert Carroll Knight and Emma Miller Langford. He lived in McAllen, TX as a child before moving back to the Amory area.  He attended Amory High School and joined the Army while in high school and served for 6 years.  Curtis worked on the Mississippi River on a riverboat and for 15 years he was employed by True Temper Sports.  In 1994, he began what would be a 28-year career in law enforcement initially with the Aberdeen Police Department and in 1996 he joined the Monroe County Sheriff’s Department and worked in all aspects as a jailer, patrol, chief investigator, and retired as Chief Deputy.  He returned working part-time as Chief Deputy and Curtis dutifully served as Sheriff of Monroe County from June 2021 thru December 2021.  Curtis was a highly respected officer, locally and abroad.   He was a Master Mason in the J.A. Mayfield Lodge and he enjoyed playing golf, fishing, woodworking and adored his dog, Ollie.  Curtis was a member of First Baptist Church in Amory.

Funeral services will be at 2 p.m. on Friday, February 25, 2022 at First Baptist Church in Amory with Dr. Allen Simpson and Sheriff Kevin Crook officiating.  Burial will follow in the Haughton Memorial Park.  Cleveland-Moffett Funeral Home is honored to assist the Knight family.

Visitation will be on Thursday evening from 5 until 8 p.m. at the church.

Memorials may be made to the Monroe County Sheriff’s Department Training, St. Jude Children’s Research Hospital, or to First Baptist Church in Amory.

To order memorial trees or send flowers to the family in memory of Curtis Knight, please visit our flower store.