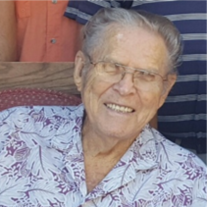 Becker- Charles Herbert Meeks, 89, died Friday, March 31, 2017 at his residence. He was born November 13, 1927 to Charlie and Tempie Smith Meeks, raised most of his childhood by his grandparents Paul Sam and Betty Smith, who were very dear to him. His mother later married Ned Bishop, who treated Charles as his own son. He honorably served his country in the US Army during the Korean Conflict, stationed at the MASH 8228 unit as a medic. Upon his arrival back in the States, he began a career that would span over 30 years with American Airlines. On April 10, 1954, he married the first love of his life, Ruby Merle Estes with whom he spent 37 wonderful years with, before her death. On December 21, 1992, he married his second love, Barbara Richardson, spending 25 loving years together before Charles was called home to be with his Lord. A Christian, rooted in deep faith, Charles stated before his death that he was ready to meet his Lord. Charles enjoyed camping, gardening and gathering vegetables from his garden, yard work and extensive traveling to places such as Hawaii and the Grand Canyon. Most of all he enjoyed cooking out with his family, especially his grandchildren and great grandchildren. He is survived by his wife, Barbara Meeks; daughters, Linda (Fred) Robinson, Brenda Meeks, Kay Meeks all of Clanton, Al and Dianne Dulaney (Barry Williams), Amory; sons, Michael (Cindy) Richardson and Allen (Charlotte) Richardson, all of Amory; grandchildren, Meranda (Shawn) Silas, Joseph (Twilla) Richardson, Justin (Lela) Richardson, Bryan Richardson, Brandi Richardson and Bradley Richardson; great grandchildren, Breanna, Braden, Dawson, Alaina and Sophia; sister in law, Charlene Bishop and her children, Tommy, Steve and Lauren; special friends, Kari, Whitt and Cameron Taylor; several cousins. In addition to his parents and grandparents, he is preceded in death by his first wife, Merle Meeks and a brother Jerry Bishop. Funeral services will be held at 3 PM, Sunday, April 2, 2016 at Cleveland Moffett Funeral Home in Amory with Bro. Bryan Richardson officiating. Burial will follow in Greenbrier Cemetery. Pallbearers will be Tommy Bishop, Steve Bishop, Shawn Silas, Joseph Richardson, Justin Richardson and Bradley Richardson. Honorary pallbearers will be Benny Farr, Butch Jones, Marlin “Butch” Smith, Robert Francher and Eddie Carroll Gregory. Visitation will be at the funeral home on Sunday from 1 PM until 2:45 PM, prior to the service. Condolences may be shared online at clevelandmoffettfuneralhome.com.
To order memorial trees or send flowers to the family in memory of Charles Herbert Meeks, please visit our flower store.