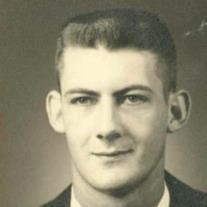 Smithville- Billy D. Ford, 77, died Saturday, May 23, 2015 at his residence after an extended illness. Born August 18, 1937 in Itawamba County, he was a son of Dew and Ora Wheeler Ford. Living in Smithville most of his life, he was a graduate of Smithville High School Class of 1956, later attending and graduating from Mississippi State University. Billy worked as a special investigator for the United States Department of Agriculture and Production Credit Association before retiring to farming in Smithville. He enjoyed spending time with family, especially his 3 grandchildren. He is survived by his wife of 57 years, Mary Charles Reeves Ford; sons, Richard Ford (Melinda), Smithville and Ramie Ford (Terri), Clinton, MS; daughter. Allison Ford-Wade (Chip), Oxford; grandchildren, Mary Claire Ford, Lloyd “Ford” Robert Wade, IV, Richard Gibbs Wade, Kelcey Bailey (Chris) and Brianne Grubbs; sisters, Dot Burrow (James), Amory and Betty Thompson (Jim), Smithville; a host of nieces and nephews. In addition to his parents he is preceded in death by 2 brother, Ray and Harold Ford and a sister Pansy Harper. A Funeral Service will be held at 3 pm, Monday, May 25, 2015 at Cleveland-Moffett Funeral Home, Amory, with Bro, Dudley Nash officiating. Burial will be in Lann Cemetery. Pallbearers will be Jerry Frederick, Jackie Palmer, Roger Cadden, Alan Clay, Ralph Dill and Jack Horn. Honorary Pallbearers will be Glenn Poe, James T. Reeves and Donald Smith. Visitation will be prior to the service on Monday from 1-2:45 PM at the funeral home. Memorial contributions may be given to St. Jude Children’s Hospital 501 St. Jude Place, Memphis, TN 38105, in memory of Lee Frederick. Online memories and condolences may be shared with the family at clevelandmoffettfuneralhome.com.
To order memorial trees or send flowers to the family in memory of Billy D. Ford, please visit our flower store.