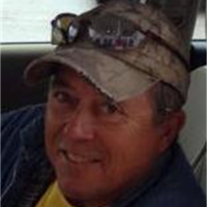 James William “Oober” Tate, 53, passed away on Sunday, November 12, 2017 at the University of Mississippi Medical Center in Jackson following a sudden illness. He was born on January 6, 1964 and was a son to James R. and Bonnie Mitchell Tate. A lifelong resident of Amory, he attended Becker School up until the 8th grade and was a 1982 graduate of Amory High School. For 29 years, Bill was a train engineer for Burlington Northern-Santa Fe Railroad running the 633 North Local out of Amory and was looking forward to retirement and spend more time fishing. Having an eye for a bargain, he was always trading cars, trucks, motorcycles, and every now and then, a tractor. Bill meticulously kept his place up from his garden to his vineyard which, in the fall of the year, he loved to gather his muscadines and scuppernongs. He was a grill master, an avid motorcycle rider, a deer hunter which he enjoyed with his buddies, and he loved the MSU Bulldogs. Bill was a member of the Unity Baptist Church and never meeting a stranger, he was loved by all and he will be greatly missed. Funeral services for Bill will be at 2 p.m. on Thursday, November 16, 2017 at Cleveland-Moffett Funeral Home in Amory with Rev. Wesley Pepper and Bro. Isaiah Waller officiating. Burial will follow in the Greenbrier Cemetery. Survivors include his wife, Mary Conwill Tate of Amory; his daughter, Kayla Ashton Tate of Columbus; two sons, Gabriel Clay Young and Cody Doyle Young (Layla) both of Amory; his father, James R. Tate of Amory; one brother, Brad Tate (Sandra) of Amory; one sister, Kim Tate Roesink (Tim) of Columbus, OH; several nieces and nephews, and a host of friends. He was preceded in death by his mother, Bonnie Sue Mitchell Tate; grandparents, Malcom and Bessie Mitchell and Rufus David and Sadie Mae Miller Tate; and a close friend like a brother, Jerry “Chirpy” Cox. Pallbearers will be Larry Wilkerson, Randy Harmon, Johnny Cummings, Mike Holloway, Mike Kimmel, Dale Fikes, Isaiah Waller, and Ronnie Gadd. Honorary pallbearers will be employees of BNSF Railway. Visitation will be 5 until 7 p.m. on Wednesday evening at the funeral home. Memorials may be Whitetails Unlimited with memo to Monroe County Chapter of Whitetails Unlimited, P.O. Box 5686, Pearl, Mississippi 39288. Condolences may be shared at clevelandmoffettfuneralhome.com
To order memorial trees or send flowers to the family in memory of Bill Tate, please visit our flower store.