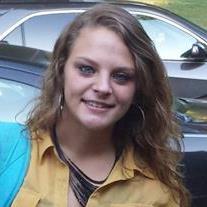 Alexis Haywood, 17, died on Tuesday, April 7, 2015 in Itawamba County. Born August 22, 1997, she was a daughter of Amy and Bill Spencer and Darrell Haywood. An accomplished volleyball player, she was a member of the Amory High School volleyball team for 4 years and she was also involved in cross country and track. Known for her beautiful smile and electric blue eyes, she would light up a room. Outgoing, big-hearted, bold and fearless, she was genuine always trying to see the best in people. Never meeting a stranger, she was quick to give an encouraging word to build someone up with which she touched many hearts. She was an animal lover and loved her dog, Bama. She enjoyed hunting and taking trips to the beach. Services will be 2 p.m. Saturday, April 11, 2015 at the Meadowood Baptist Church with Bro. Lloyd Sweatt, Bro. Truman Carter, and Bro. Chuck Moffett officiating. Savanna Smith will deliver the eulogy. Burial will be in the Coontail Cemetery. Cleveland-Moffett Funeral Home of Amory is in charge of the arrangements. Survivors include her mother, Amy Householder Spencer and Daddy Bill of Wren; her father, Darrell Haywood; grandparents, Ed and Joyce Householder of Wren; one brother, Connor Haywood of the home; 3 sisters, McKenzie Haywood of the home, Brooklyn Riley of Fulton, and Hailey Spencer of Aberdeen; uncle, Keith Householder (Carrie) of Aberdeen; two aunts, Carla Westbrook (Wayne) of Ocean Springs and Lori Childress (T.C.) of Aberdeen; a host of other aunts and uncles; numerous friends; and a cousin/best friend, Kayla Angeloff of Aberdeen. Pallbearers will be Keith Householder, T.C. Childress, Doug McDonald, Dusty McDonald, Kaylen Tate, Houston Woodman, and Stetson Harlow. Honorary pallbearers will be Taylor and Robert Maharrey; the Amory High School volleyball team and the Amory High School class of 2015. Visitation will be 5 until 8 p.m. on Friday night at the funeral home and the body will lie in state from 1 p.m. until service time on Saturday at the church. Memories and condolences may be expressed at clevelandmoffettfuneralhome.com
To order memorial trees or send flowers to the family in memory of Alexis Reed Haywood, please visit our flower store.